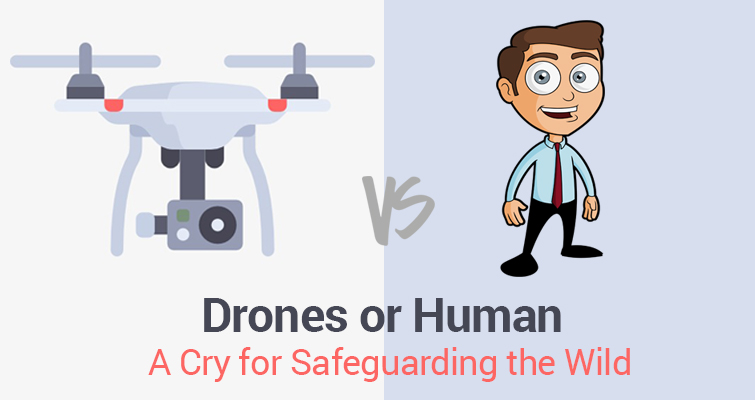 Drones or Human: A Cry for Safeguarding the Wild

For years, humans have been climbing on elephants back and wandering inside the dense forest of wildlife sanctuaries checking on the animals. But today, things tend to take a simpler turn in saving our wildlife, thanks to the invention of drones. It’s lightweight and quiet motion that hovers above give great aerial shots and a better view of the wild....but before we begin further, what are drones? They are an unmanned aerial vehicle (UAV) flown by a ground-based controller. Earlier, the uses of drones were only meant for military applications for missions considered too dangerous for humans. But gradually, drones became a great benefit to other departments as well, to name a few, geologists, scientists, videographers and the wildlife.

Now, let us look at the main reason on the topic mentioned above...

Why is drone a convenient & best means to conserve wildlife? 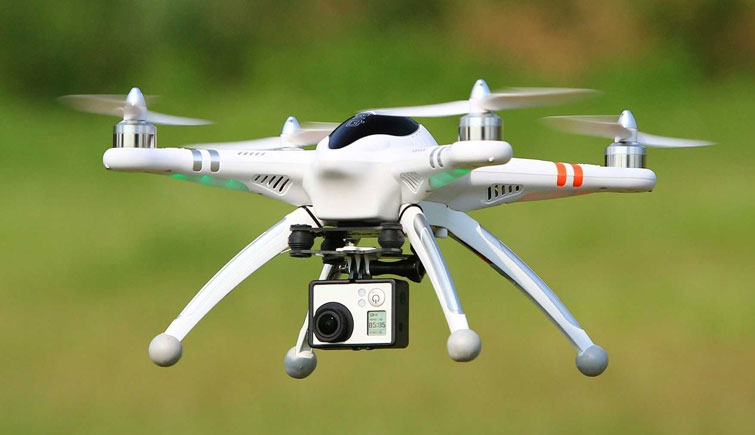 Truth be told, there are both good and bad sides of using a drone, to which we will discuss further...but let us focus more on the positives for now because there are plenty. Drones give a better monitoring of the wildlife situations than on-land traditional kind says the Australian researchers in Canberra. It is true because, not only we get a better perspective to look over the wild but also is an easy way to count the animals who are rather difficult to spot from the ground, like Orangutans. The researchers and scientists from the University of Adelaide agreeing on the experiment built a colony using a number of artificial rubber ducks. Few ground spotters were assigned and pitted against the drone to count the birds, it resulted that the drones are more accurate, ultimately voted as the best gadget to monitor the wildlife. But since it takes time to count using drone imaginary, the researchers built a computer algorithm to ease the counting of the wild animals automatically. In wildlife scenario, the current drone experiments are used for completing wildlife projects like monitoring the flora and fauna and preventing deforestation. It also plays as an asset in detecting illegal wildlife activities and fights against poachers or other violent hunting, basically, the drones help in protecting the ecosystem.

Let us read about the effects of using Drones in Wildlife...

Demerits: The use of drones for the conservation of wildlife and its habitat seldom strikes a debate whether it is safe for animals or not. Despite drones much convenient help towards humans, we wonder what are animal’s psychological reactions to drones. There have been studies on animal behaviour on Minnesota's black bears stating that their heart rate increases after seeing a flying object hovering in the sky. This concerns the wildlife sector whether the animals get distressed over it. Scientists in Minnesota did a study on the behaviour of bears by implanting sensors in their body. The drone was flown 17 times over them and during the trial the heart rate of the bears significantly spiked from 39 to 162 beats per minute. On the contrary, most bears did not move or seemed to be bothered by the constant movement of the drone, while some ran or hid. Likewise, in Utah's Zion National Park, back in May 2014, a drone cause separation of sheep (mothers and calves) leading the park to ban such objects saying that it invites harmful effects of using drones in the national park.

Merits: One best thing about drones is that it can pinpoint the location of the poachers, this helps in avoiding the dehorning of rhino or other casualties. But the major problem we can prevent are natural issues like deforestation, for example, one of the endangered species, the Sumatran Orangutans is on the verge of extinction and we constantly try to look out for their safety. Since most of these primates live in trees, it serves as their sole survival place from other ground animals. These species are difficult to find from the lower level, that’s when the drones come to the rescue, enabling the wildlife researchers to get information on the nest of certain animals. Drone technology as mentioned earlier also plays a huge role in anti-poaching and also protects the reef and avoid illegal fishing. It is true, animals do get distressed hearing unusual noise from an unknown object, perhaps quieter drones might lessen down the stress impact on the animals. 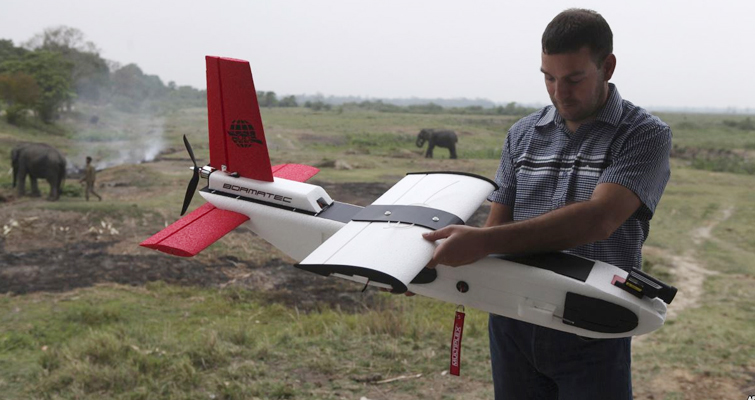 Conservation drones are also looking good for the Indian wildlife sectors as a few were already tested in some of the national parks in India, in parts of Assam and Madhya Pradesh; they are considered beneficial. It can be used for transmitting visual data on the wild animal behaviour and habits of the species. Using drones can help to detect animal movement on a real-time basis since large species like rhinoceros, elephants and even tigers move to unsecure of the protected areas often where poaching activities are likely to occur. The use of drones in national parks can also help in collecting information on forest areas and other wildlife casualties like flood and fire breakout or severe injuries to animals.

Consider it this way, drones are one of the convenient and best gadgets that have helped in many departments in different ways. And in wildlife, it is just getting started for a better tomorrow. Despite animals getting stressed over UAV, there are chances for animals to adapt drones as part of their lives similar to how humans have. Now coming to the idea that started this blog, whether you think drones or humans are better means to support wildlife, so far, drones are on the verge to win the debate. But there are advantages and disadvantages of using drones but that is going to be another topic to discuss on. Putting an end to this topic, lastly, I’d like to ask you a question, do you think using drones can help maintain wildlife? You can write your answers on the comment section below.