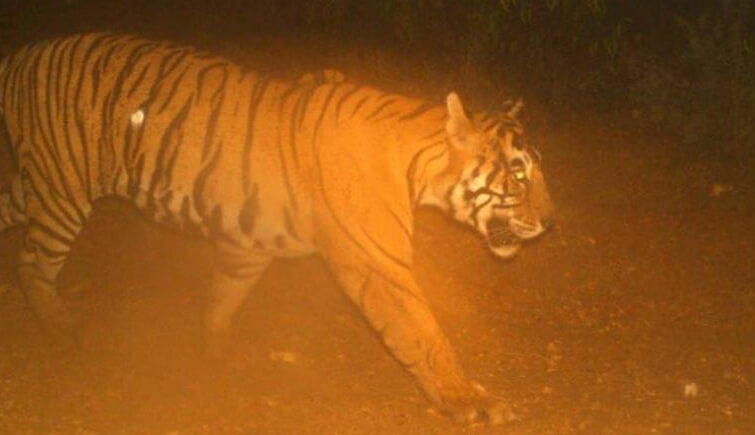 10 years: that’s how much time it took for T-38, a tiger from Ranthambore National Park, to return to its home after it had strayed into Kuno Wildlife in Madhya Pradesh at 4 years of age. Although it was captured in cameras for the past several years, it is only now that it has been seen in his home - Ranthambore National Park, again. Naturally, the officials, along with everyday else, are elated at this “Ghar Wapsi”.

T-38 had strayed into Kuno 10 years back

The tiger T-38, son of the tigress T-13 and brother of Ranthambore’s famous tigress Noor, or T-39, had strayed into Kuno Wildlife Region in Madhya Pradesh at the age of 4. He stayed there for 10 years, before returning home to Ranthambore. It was last seen on 15th November in the Kundera and Taleda Ranges of Ranthambore National Park. T-38 is now 14 years of age.

According to Sanjeev Sharma, ACF Ranthambore Tiger Reserve, "Tiger T 38 has returned to Ranthambore and his movement is restricted to the Kundera and Taleda region for the time being. T38 migrated from Ranthambore in 2010 and when it was tracked down in Kuno Palpur wildlife sanctuary in MP which is over 150 km away. Every tiger has unique stripes on the skin. In October, we received Photographs of tigers that didn't match with any of the IDs of our tigers. When we received the photo for the second time, the tiger's left-right side stripes matched with T38 which had gone to MP about nine years ago."

He adds, “Tigers are more in numbers in Ranthambore and that's the reason why the animals migrate to other regions. T38 is around 14 years old and at this age, tigers usually don't migrate. Maybe a young male tiger acquired the territory of this tiger and since he knew the track he returned back.”

Ans: The mother of tiger T-38 is tigress T-13 while its sister is tigress T-39, also known as Noor, and one of the famous tigresses of Ranthambore.

Q: After how many years did T-38 return to Ranthambore?

Ans: The tiger T-38 returned to Ranthambore after 10 years. It had strayed into Kuno Wildlife in Madhya Pradesh in 2010.