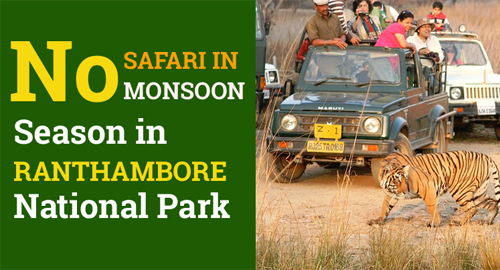 National Tiger Conservation Authority (NTCA) orders for ceasing jungle safari in all the zones of Ranthambore National Park in the monsoon season. Although the park has already restricted safaris in most of its part but zones 6,7,8,9 and 10 were still open for the tourists.

It is said that in order to not to disappoint the travellers who come to Ranthambore in the monsoon months, the park authorities decided to conduct safaris in certain zones where the chances of tiger sightings were almost zero. However, with the increased population of tigers in these zones, they have become the Critical Tiger Habitat. NTCA supported its decision with the fact that the monsoon season is also the mating season of the animals.

On the other side, the local hospitality industry is taking a stand against the decision of NTCA. According to them, jungle safaris help in monitoring the movement of tigers and illegal forest cutting and other activities. Also, keeping the safari open year long helps in improving the tourism rate in the park and the region as well.

It is to be noted that NTCA is responsible for restricted jungle safari in the monsoon season in the neighbouring Sariska National Park as well. Initially the wildlife reserve used to remain open all through the year but it was NTCA IN 2006 that ordered to keep the park closed for the tourists in the rainy season.